You are here: Home / Business / The Making of Harry Potter – Secrets Will be Revealed

Back in July during the London 2012 Olympic Games, ReSource was thrilled to be invited to ‘The Making of Harry Potter’ Studio Tour at Warner Bros. Leavesden Studios in Hertfordshire, UK.  This was part of the publicity initiative for the UK government’s ‘Great British Business’ project, which saw summit conferences, outings and special events to showcase the benefits of doing business in the UK.

The tour promises to show the inner workings of the film-making process, and to reveal secrets of how various effects were achieved. If you’re missing the release of new books and films, it’s a great way to get back into the Harry Potter world. With half term approaching, it would make a great family day out as it’s not weather dependent, and has all the facilities and entertainment you need for a variety of ages from young to old! 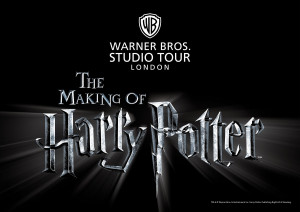 We’ve been avid readers of the Harry Potter books since the publication of the first edition, ‘Harry Potter and the Philosopher’s Stone’, in 1997, ordering each subsequent volume in advance, and we have seen all the films in the cinema.
The worldwide phenomenon of J.K. Rowling’s books, films and merchandise is a superb showcase for British imagination, creativity, technical expertise and enterprise, and this ‘behind the scenes’ Harry Potter tour, which opened earlier in 2012, offers rich insight into the astonishing scope of the project.
Successfully translating beloved characters from page to screen is always a delicate task, creating settings which reflect the diversity of locations is equally challenging, and so the opportunity to see how this was accomplished over the eight years during which the films were made is an enticing prospect, and it has been very well conceived. 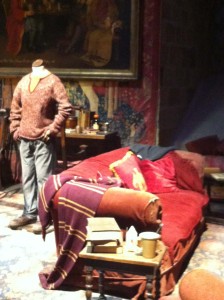 We visited during school holidays, and the site was very busy; however, the experience flowed well, the organisation was good and there was plenty of car parking – even the café coped with the numbers!
The tour itself is phased to offer a short introductory film and talk, followed by entrance into the Great Hall, and from there through various sets, complete with magical displays of things such as Molly Weasley’s self-washing frying pan, the self-knitting scarf, the Potions classroom, Dumbledore’s office and Gryffindor Common Room.
The Backlot shows some of the key places and features of the films –  the house at 4 Privet Drive, Diagon Alley, the Knight Bus, the Chess pieces  – and the Creature Shops are superb.
The Model Room has an enchanting model of Hogwarts Castle, and throughout there are displays of real costumes, models, accessories and figures which give a taste of the massive amount of work which went into the creation of the eight films and their special effects.
Find out more here: http://www.wbstudiotour.co.uk
Christine Miller

On-Demand: Industry luminaries, @itilso & @MatthewKBurrows discuss strategies for getting ahead of the #digitalskills shortage by leveraging #SFIA (Skills Framework for the Information Age). https://bit.ly/SkillsShortageWebinar #PassionForPotential

Your Ultimate ReSource is a supplier of premium knowledge for intelligent people who know their personal growth underpins all other aspects of their progress in life: the Ultimate ReSource for cutting edge information and fast, practical ideas for a better, happier life. Your Ultimate Resource is dedicated to growth, to Kaizen principles, to global community and to the development of the ultimate human resource – the whole person - as the essential factor for beneficial change. Find out more about ReSource here

All material published on this website is ©Copyright of either the original Author/Creator  and/or www.yourultimateresource.com or resourcemagazine.co.uk or Porto Publishing. Copying or reproduction of the material in any form is prohibited under International Copyright Laws.
Contact us with full details of how material is to used, to obtain formal permission to reproduce material.
Members purchasing copies do so for their personal use only.

We use cookies on our website to give you the most relevant experience by remembering your preferences and repeat visits. By clicking “Accept All”, you consent to the use of ALL the cookies. However, you may visit "Cookie Settings" to provide a controlled consent.
Cookie SettingsAccept All
Manage consent

This website uses cookies to improve your experience while you navigate through the website. Out of these, the cookies that are categorized as necessary are stored on your browser as they are essential for the working of basic functionalities of the website. We also use third-party cookies that help us analyze and understand how you use this website. These cookies will be stored in your browser only with your consent. You also have the option to opt-out of these cookies. But opting out of some of these cookies may affect your browsing experience.
Necessary Always Enabled
Necessary cookies are absolutely essential for the website to function properly. These cookies ensure basic functionalities and security features of the website, anonymously.
Functional
Functional cookies help to perform certain functionalities like sharing the content of the website on social media platforms, collect feedbacks, and other third-party features.
Performance
Performance cookies are used to understand and analyze the key performance indexes of the website which helps in delivering a better user experience for the visitors.
Analytics
Analytical cookies are used to understand how visitors interact with the website. These cookies help provide information on metrics the number of visitors, bounce rate, traffic source, etc.
Advertisement
Advertisement cookies are used to provide visitors with relevant ads and marketing campaigns. These cookies track visitors across websites and collect information to provide customized ads.
Others
Other uncategorized cookies are those that are being analyzed and have not been classified into a category as yet.
SAVE & ACCEPT
Copyright © 2022 ·Your Ultimate ReSource · Porto Publishing · All Rights Reserved · Log out